Today I will be setting up a very special installation at Panzer’s Deli 13-19 Circus Road, London NW8 6PB.

Back in June this year I  was commissioned by Panzer’s CEO David Josephs to create something very unique to celebrate their 75th anniversary so I decided to create a knit and crochet bagel bar where customers are able to choose their own bagel and fillings which are all knitted and crocheted to create their own bespoke art piece.

Once customers have selected their artworks they are mounted, signed and framed as an original art piece. If you are unable to attend the celebrations at Panzer’s please contact the studio here info@katejenkinsstudio.co.uk where you can order one to your specifications.

Mr Panzer was an Austrian refugee who came to London after serving in the military during World War II. He went into business with Mr Vogl, a refugee from Czechoslovakia who was running a deli in Cricklewood. The first Panzer’s shops were in Willesden Green and Golders Green before opening on Circus Road in 1956. Panzer’s is the original Jewish delicatessen in London and has been world-famous for its hand-sliced smoked salmon, salt beef and bagels since 1944. 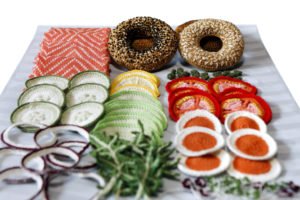 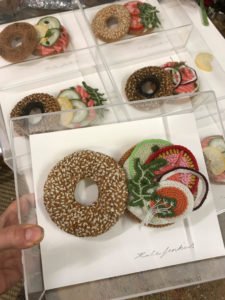 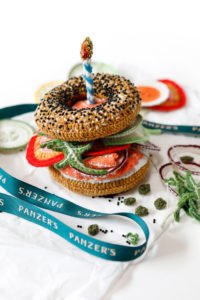 Leave a reply Click here to cancel the reply

Christmas Cards and other gifts…..